Making a better world, one city at a time

My City, a Finnish company with Russian roots, offers a public platform for people to share ideas on how to improve their local area. They went to visit the Code for America Summit in San Francisco from 23-25 September. This is an annual event in the United States where local governments meet with the leaders in civic technology development to exchange ideas, look at best practices, and discuss the latest innovations to help improve the way local government works. 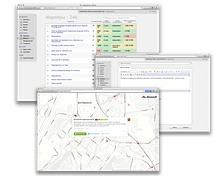 My City appears as an interactive map where people can share what they think is great in their city.

“We had two main objectives at Code for America,” says Dennis Kreminsky, My City co-founder. “First, we wanted to see if our perception of civic involvement is in line with how it works elsewhere.” Dennis says they were well-received, with a lot of curiosity about and interest in their platform.

This is especially pleasing because the United States is well-known for its support of democratic principles. It shows My City is on the right track.

“Second, we wanted to network, meet potential customers, and see what our competitors are doing,” says Dennis. Although there are a few similar products, My City is the only one looking at civic improvement through positive suggestion and online discussion.

My City appears as an interactive city map where people can click on locations to write about what they would like changed, reply to other people’s comments, and share what they think is important with social networks. The map uses coloured dots to highlight the areas that people comment on. City administrators then use this information to make more informed decisions on civic improvement projects.

With plenty of interest in their unique product in a huge, global market, My City has enormous potential.

An exciting place to be

The original idea came from an architectural workshop, where there was a network of pins sticking notes onto the wall. Co-founder Stepan Mitaki, who attended the workshop, thought it would be good to put the same concept online. And so My City was born.

Although its founders are from Murmansk in Russia, My City is incorporated in Finland and will soon open an office in Helsinki. With success stories like Rovio, Jolla and Supercell, Finland is developing quite a reputation for nurturing tech startups, and has an extensive business infrastructure to support this. So Helsinki is an ideal location for the headquarters of this promising new company.

Investor Saku Everi is a partner at Helsinki Ventures, which is one of the local organisations that helps budding companies develop, commercialise and make their products global. He made first contact with them last year at Slush, the annual startup conference, and has become as enthusiastic about My City as its founders.

“From the start, My City as a product looked good and had an intuitive user interface,” he says. “That grabbed my attention right away because it meant the team behind it had to be good. Plus it already had users to validate the solution.”

Saku continues: “It was clear that My City wasn’t just an idea – it was an idea that really worked.”

With the positive response in America, Dennis sees a good future for My City. He can envision a time when there are cities in every country in the world running a My City platform. My City is already up in 9 cities in Russia and one in Finland, with pilot projects in 6 other cities in Finland and Norway, and preliminary agreements towards starting in the US and Mexico.

“Although much of the world lives in democracies, many people feel that their elected representatives are out of touch with the people,” says Dennis. “Participative decision making in large urban areas is too complicated and costly. My City solves that problem. Everybody can have a say, and government gets feedback on what is really needed.”

Instead of waiting for elections to voice their opinion, people can, in effect, vote on the map right now. Cost- and time-efficient, governments will be quicker to respond and be better able to serve the needs of the people.

It’s a new era in civic management. And My City is leading the way.