Indoor Atlas wants to be the GPS of interiors 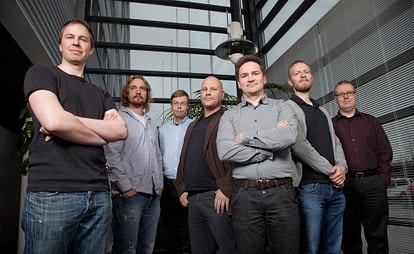 Indoor Atlas wants to find its way into every mobile device on the globe. A great push towards the target was given by Baidu, Chinese web service giant, which invested 7.6 million euros in the company.

Although the recent employment cuts have hit hard in Oulu, the Northern city doesn’t only echo bad news. New innovation-based startups the likes of Indoor Atlas are now wanting to make use of the skills of those left jobless by big corporations.

Haverinen’s got work for plenty of hands; the indoor positioning service of Indoor Atlas wants to find its way into every mobile device on the globe. A great push towards the target was given by Baidu, Chinese web service giant, which invested 7.6 million euros in the company. Another 3.3 million euros was raised from Mobility Ventures, Koppi Catch, Vera Ventures, Finnvera and Finnish Funding Agency for Technology and Innovation Tekes.

From the original group of eight, Indoor Atlas has grown to consist of 17 employees in Oulu, Finland and Silicon Valley, US. Some of them continue to work at the University of Oulu.

— It’s good to have a foot in the door in the academic world, too. That way we can follow the newest scientific research, Haverinen points out.

The first steps of Indoor Atlas were taken exactly there, in academia. Haverinen, a professor at the University of Oulu at the time, was attempting to make a robot move northward using the robot’s digital compass. However, the robot wasn’t acting as planned; instead it seemed to wander all over the place. For example steel used in construction disrupts the magnetic fields indoors so that the robot found itself lost.

Haverinen placed another robot on the same spot assuming it’d be equally clueless. To his surprise, it turned out the robot was following the exact same complex path as the first one.

Haverinen, who’s got 15 years of experience in research, realised that although the building materials affect the magnetic fields, the deviations remain constant. They can be traced with compass sensors and, similarly to outdoors, they can be used in the making of maps.

In 2012 Haverinen and seven of his colleagues started Indoor Atlas, a company with the dream of measuring and commercialising the magnetic landscapes of all interiors.

From a cloud to all mobiles

In practice, Indoor Atlas can be used for modelling a magnetic map of an indoor area such as a supermarket. A similar process can be completed with the help of a wireless network, but according to Haverinen, Indoor Atlas beats wifi in usability and accuracy.

The information is first collected using a mobile phone and then added onto the cloud service of Indoor Atlas. The program can then evaluate the information using algorithms and create a map that can function as a base for indoor positioning in a mobile application. The app can help anyone navigate indoors; for example, it can guide a consumer to his or her favourite porridge oats or today’s offers in a supermarket.

So far anyone has been able to register as a user of Indoor Atlas’s indoor positioning service, and its use has been free of charge. In the future the product will include several additional functions, and it will no longer be free to use.

Before that the aim is to develop the product and its usability further with several partners. At the moment Indoor Atlas is preparing the newest version of the product ready for launching, after which even small companies and organisations are hoped to try out indoor positioning in their applications globally.

Eventually the technology developed by Indoor Atlas can be a standard feature on every smartphone.

— It’s interesting to see who end up making use of the new idea. The invention has got great potential, as although indoor positioning hasn’t got established technologies yet, they are developing at a fast pace, Haverinen points out.

Haverinen says that the company is strongly headed to the international markets. Hence a big chunk of its energy is directed towards the United States, where Indoor Atlas also has an office. Haverinen deems it possible to think that at some point the number of employees will be doubled.

The core competencies are, and will remain, in Finland.

— Finns are loyal and innovative workers, which helps keeping a clear focus and maintaining long-term goals.

From the original group of eight, Indoor Atlas has grown to consist of 17 employees in Oulu, Finland and Silicon Valley, US. Photo: Indoor Atlas.

Article published in cooperation with Good News from Finland.

Startups and know-how – a match made in heaven