From Finland to the growing global game industry

In 2016, Helsinki Business Hub introduced Russian edugame developer Whisper Arts to a Finnish animation series called Dibidogs. Futurecode, the company behind Dibidogs, chose Whisper Arts as its game developer partner, and the two have been very busy since. The companies plan to launch a new Dibidogs game next year, while Futurecode is preparing for the second season of the TV animation. At the same time, Whisper Arts is developing new educational mobile apps in a Finnish startup accelerator.

The two men agree: this is an excellent partnership. In just two years, it has produced Dibidogs digital stickers, a mobile game app and an interactive magazine, all available in app stores. Now the gaming partners are developing another kids’ edugame app, which will be launched next spring.

“We’re in the process of testing the new game under the working title Dibigotchi. It’s actually a wide educational application for kids between the ages of 2 and 12. They get to take care of a digital Dibidog pet, play a memory game and learn to pronounce and spell English words. We are also including useful built-in properties that will allow parents to control when, for how long and which apps their kids are using,” says Technical Director Oleg Demianov from Whisper Arts.

“We will first launch the new game in English, and other languages will follow later. The launch is global, but we see China as our most potential market. The application could also work as a digital aid for English teachers in non-English-speaking countries, if pronunciation is a challenge,” says CEO Jim Solatie from Futurecode.

China first, the rest of the world to follow

Futurecode and Dibidogs have a lot going on in China. The first season of the Dibidogs TV animation was a success among Chinese kids even though there were no Dibidogs products at the time.

“Our animation partner, Blue Arc, is a Chinese company, so that already takes us closer to the Chinese market. The second season of Dibidogs brings together Chinese animation, Finnish pedagogy and Hollywood scriptwriting, and we’re really looking forward to airing it in China next year. By that time, we also want to be prepared with good products, particularly games and other digital apps. The TV series and the Dibigotchi edugame will support each other nicely,” Jim Solatie explains.

“As far as other markets, things are still open and much depends on meeting the right partners in trade shows. We have our eye for example on Latin America because the Finnish education system is recognized there. Dibidogs are also really popular in Thailand, where season one has had countless reruns,” he continues.

Futurecode is also running an early childhood education center in Beijing. The center is called DibiAcademy and it offers Finnish kindergarten teaching to Chinese parents and their kids for one hour twice a week. The Chinese lifestyle can be stressful and competitive from an early age with lots of homework even for young kids. The center is introducing a more laid-back and fun approach to childhood. Futurecode is also planning to open kindergartens in Central China.

Helsinki Business Hub has been very helpful and still continues to support us and spread our message.

Games and apps developed in Finland for a global audience 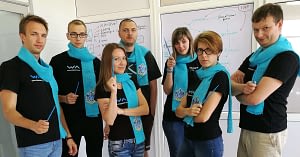 Whisper Arts is a well-established mobile app developer on the Russian market with 50 published apps and more than 21 million downloads. The company started from kids’ educational apps but is now also developing apps for adults. It offers a breastfeeding tracker and baby diary and is working on a household chore tracker and animal and plant care reminders. Whisper Arts has its own Edugame Creator platform for in-house development projects. It’s also working with Disney in Russia, as well as various other publishers, turning their print content into digital format.

Right now, however, Whisper Arts is participating in the Finnish Levelup startup accelerator program. Its goal is to further develop its Mr. Pillster medication tracker app.

“We are keen to find partners and to have outside experts take a look at our product. Levelup accelerator is a good fit for us. The Finnish government and business ecosystem have also attracted a great community of developers and potential partners here,” Oleg Demianov says.

“We are looking to access the global market via Finland and are investigating possibilities of setting up an office here. Finnish products are more readily trusted than Russian ones, no matter how good they are. The Made in Finland brand and trustworthiness could help us access the international market faster,” he continues.

“And Finland doesn’t really have early childhood edugame developers. When Helsinki Business Hub introduced us, it was obvious that collaboration could benefit both of us. Helsinki Business Hub has been very helpful and still continues to support us and spread our message, for example at the World Expo 2017 in Kazakhstan,” Jim Solatie says.

In addition to helping the two companies set up and develop their cooperation, Helsinki Business Hub has also supported and provided Whisper Arts with information on establishing and developing a business in Finland and introduced it to various other edugaming companies.

Dibidogs has a strong environmental education message. Seeing the next generation grow has prompted Demianov and Solatie to look at the world differently.

“We need to get kids thinking about the environment from an early age. They need to know the consequences of their actions to make the world better. Dibidogs is an excellent tool for educating them,” Demianov says.

“Mobile apps and edugames in general are a good way to show kids that they can influence their parents and other adults and their decisions,” says Solatie.

When it comes to the future of the two companies and their collaboration in the growing gaming industry, both men are optimistic.

“I’d like us to be really strong players in the early childhood edutainment market. It would be great to set up a joint company in Finland in the future,” Solatie says.

>> Read also the story how the partnership between Whisper Arts and Futurecode begun.

Would you like to know what kind of opportunities Helsinki has to offer for your company?

We help foreign companies to find business opportunities in Greater Helsinki. All needed information and contacts to the Helsinki ecosystem are just one phone call away.

Duranc lands in Europe via Helsinki

(c) City of Helsinki A world-first: Nokia, Elisa and Efore commercially deploy a liquid-cooled base...
Scroll to top